Missouri is Home to 10 Fortune 500 Businesses

Fortune Magazine recently released its 2019 Fortune 500 rankings. Ten Missouri-based companies were included in this year’s Fortune 500 list. Centene moved into the position of the highest ranked Missouri company among Fortune 500 companies, up to 51 from 61 last year, with revenues of $60.1 billion. Other Missouri companies that experienced rank increases from the previous year include: Edward Jones, Graybar Electric, Olin, and Post Holdings. Post Holdings had the largest increase, climbing 41 spots from 512 to 471 in the rankings.

Most of Missouri’s Fortune 500 companies are based in the St. Louis area, with the one exception being O’Reilly Automotive, which is headquartered in Springfield. The acquisition of two notable Missouri Companies in 2018 by companies located outside of Missouri—Express Scripts, which was purchased by Cigna Corporation, and Monsanto, which was purchased by Bayer Pharmaceuticals—caused them to fall off of the list. Profits for the remaining companies increased nearly $8.0 billion over 2018. Missouri’s ten Fortune 500 companies employed over 291,880 people, of which approximately 23,000 are Missouri residents and were paid roughly $2.4 billion in wages according to the 2018 analysis of Quarterly Census of Employment and Wages program data. 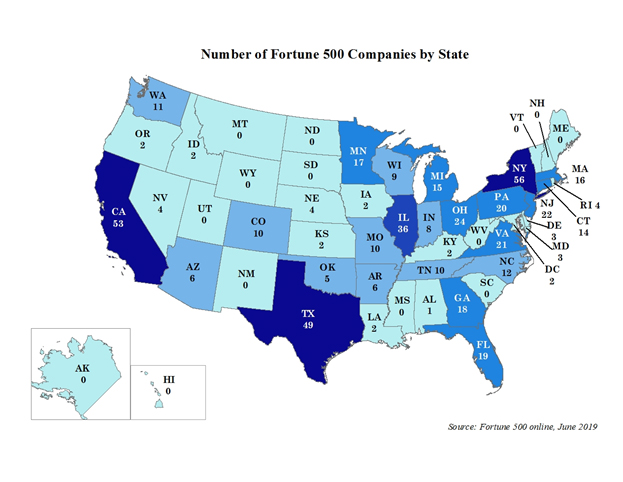