The broadest measure of economic activity is the gross domestic product (GDP). Gross Domestic Product by State (GSP) measures the value-added from industries in a state. According to estimates from the U.S. Bureau of Economic Analysis, Missouri ranked 20th nationally in GSP at $282.2 billion in inflation-adjusted dollars, a 2.3% percent increase from 2017 to 2018. Nationally inflation-adjusted GDP increased 2.9% percent over the same period. 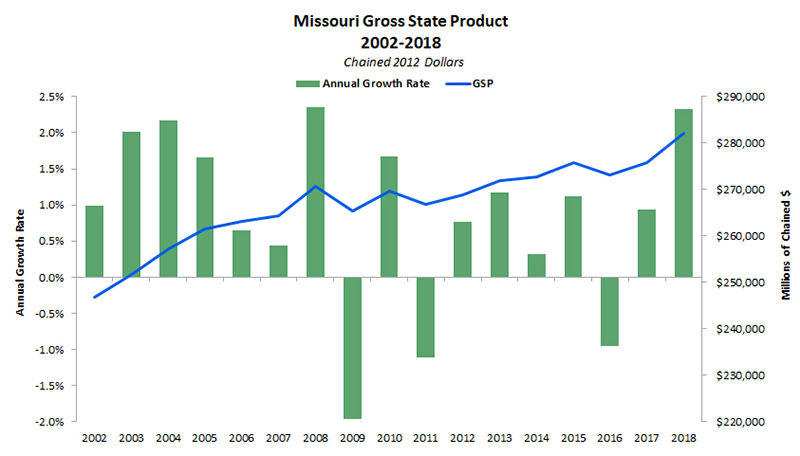 Missouri’s private sector grew 2.8 percent and contributed over $250.3 billion to Missouri’s GSP in 2018. Government declined by 1.2 percent, but contributed nearly $32.0 billion. Among private sector industries, Manufacturing represents the largest share of GSP in the State at 12.7 percent. Real Estate (11.0 percent) and Health Care and Social Assistance (9.1 percent) are other top contributing industries to Missouri’s GSP.

A 10-year analysis of Missouri GSP industry-shares shows growth in some sectors and decline in others. Most notable, Professional, Scientific, and Technical Services increased from 6.2 percent of GSP in 2008 to 7.5 percent in 2018. The majority of this growth is attributable to the Computer Systems Design industry, which has exhibited growth each year over this time span. From 2008 to 2018, Health Care and Social Assistance has steadily increased by 1.0 percent (from 8.1 percent in 2008 to 9.1 percent in 2018). Construction, however, experienced a decline of 1.1 percent share of GSP over the past decade from 4.3 percent in 2008 to 3.1 percent in 2018.

Nationally, Real GDP growth increased in 2018 to 2.9 percent, up 0.6 percent from 2017, (5.1 percent change from 2016) and 19 percent change from 2008. Real GDP grew in 50 states and the District of Columbia and ranged from 5.7 percent in Washington to -0.3 percent in Alaska. Manufacturing, Information Services, Professional, Scientific, & Technical Services, and Management of Companies and Enterprises were the leading contributors to growth in 2018. Agriculture and Finance and Insurance declined nearly 0.1 and 0.4 points, respectively, in GDP share over the year. 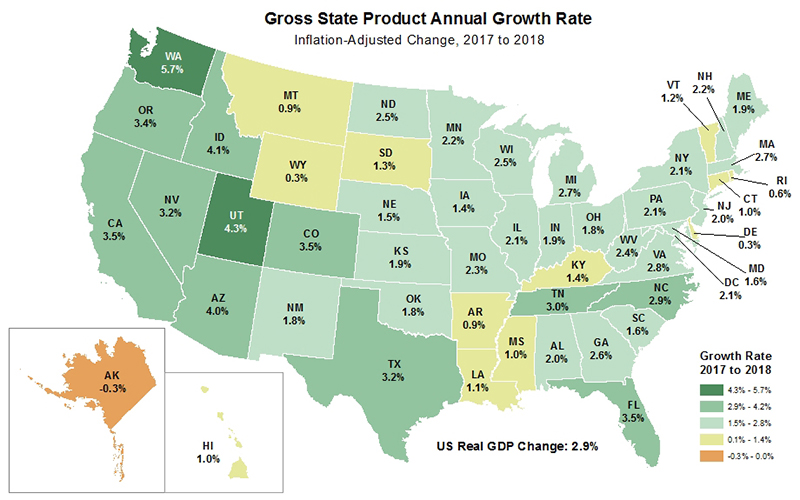